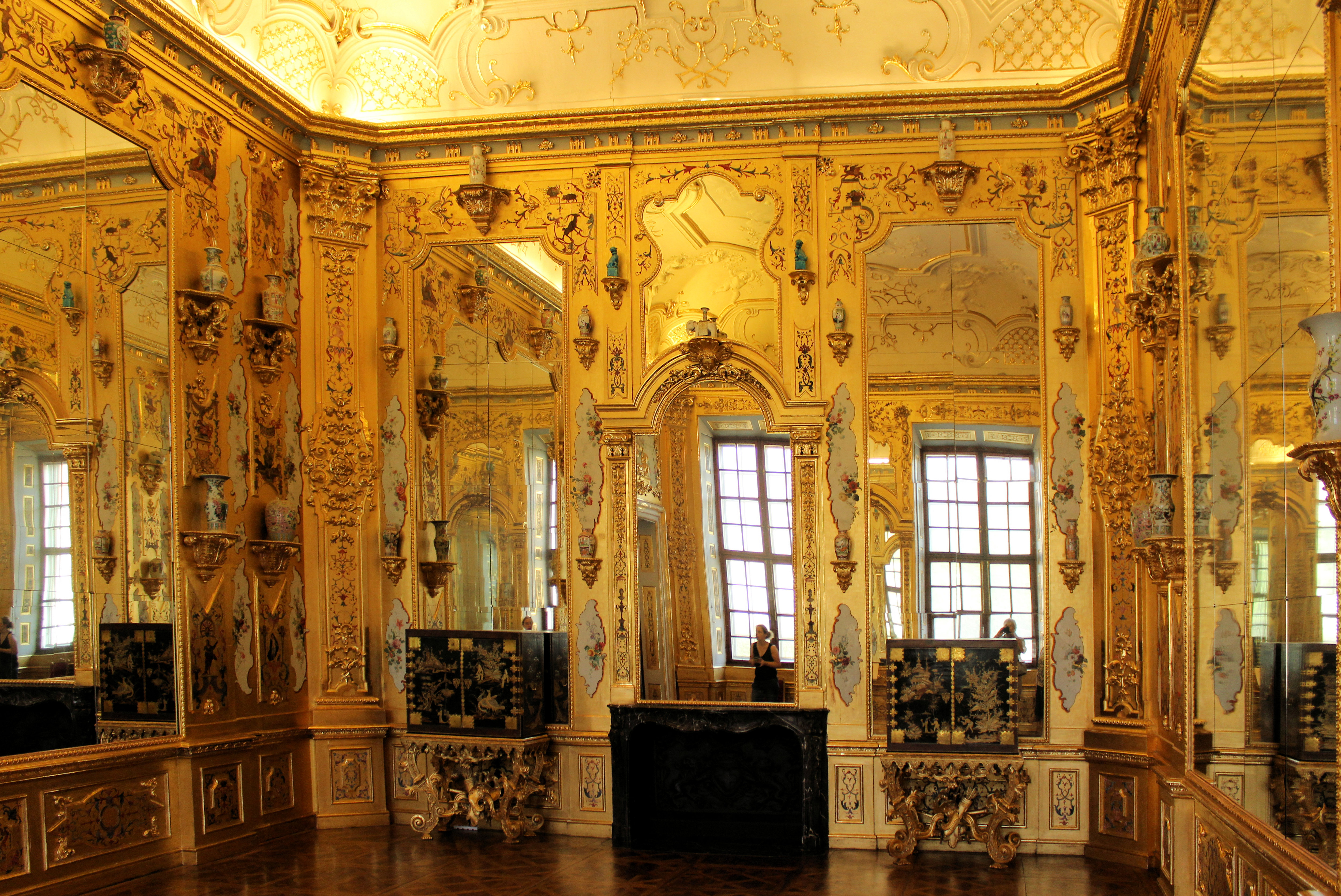 The Mirror Cabinet makes the greatest impression, also called Golden (Goldkabinett), in which oriental decorative vases are collected. The decor is complemented by grotesque paintings on gilded 23-carat gold paneling. The room is small, and the eye is primarily attracted by the marble Apotheosis of Prince Eugene of Savoy, carved by Baltazar Permoser. Represents a group of characters, which only seem to be absorbed in one thought – do not fall off the pedestal! The prince was immortalized in full armor, stomping enemy, and at the same time modestly trying to blow the horn of Sława.

The Mirror Room is the last room occupied by the Museum of Baroque Art, but other treasures can be seen in the former conservatory, which is accessed by stairs down from the palace. Orangery, turned into stables by Maria Teresa, now houses the Museum of Medieval Art (Museum of Medieval Art). The sculptures and paintings on display here come from the 12th to the 16th centuries., and most are from the 15th century. One of the most beautiful altar sculptures is the convex relief from the South Moravian Znojmo, made in 1450 r. The work presents the scene of the crucifixion. It is worth paying attention to five paintings by the Tyrolean, Michaela Pachera, symbolizing the transition period between the rather static one-dimensional gothic art and the love of perspective that heralds the beginning of the next era, Renaissance.

Belvedere gardens, full of boxwood hedges, fountains, waterfalls and sculptures occupy a wide slope. Their main thoroughfare is a magnificent avenue, which leads to the biggest attraction, the stunning Upper Belvedere Palace. Eugeniusz Savoy started buying land for gardens in 1693 r. He hired Dominique Girard, which was to create a perfect baroque arrangement, using knowledge, the knowledge of Versailles had given him. During the prince's lifetime, the gardens looked more magnificent than they are today, and the layout of the sculptures was well thought out and very complicated. The lower part was the domain of the elements, the higher one was devoted to the deities. Today, this fancy allegorical scheme exists in a rudimentary form.

Midway, next to which stand the statues of eight muses, it goes uphill towards the lower cascade, a huge shell supported by tritons and sea nymphs. On one side of the alley, there are four divinets in the recesses, that is, gardens made of appropriately cut hedges. Two of them are circular, two are square. They were decorated with statues of Pluto and Proserpine, Deities of the Underworld. Putti, symbolizing the seasons, stand on the stair railings on both sides of the cascade. Next is the first of the famous Belvedere sphinxes. At the top of the upper cascade, water gushes from the throat of the terrible beasts. The higher part of the garden was intended to symbolize Olympus, but in the 19th century. statues of Greek gods gave way to more sphinxes.

The main entrance to the gardens is south of the Upper Belvedere. On both sides of the magnificent, Forged iron gates stand with lions holding the coat of arms of the House of Savoy. The prince was an avid gardener and he imported from all over the world! rare and exotic plants. He also founded a menagerie east of the Upper Belvedere (only the outline of the radial paths remained) and an aviary. The latter used to be in the conservatory, however, it has been converted into apartments. The prince bred many species of rare birds and his beloved eagle there, which he personally fed each day.

East of the main entrance of the Landstrasser Gurtel is the founded village of 1793 r. a small Alpine Garden (Alpengarten). It is covered with various species of heather, shrubs and alpine flowers huddling in their natural habitat to the rocks in search of protection against biting cold winds. To the north of the Alpine Garden stretches the village of 1754 r. university botanical garden (Botanical Garden). Its area is equal to that of the former Belvedere gardens. It resembles an English park. It falls towards the alpine harvest (by name) bushes near the entrance from Me-chelgasse. Red squirrels prefer the more wooded part of the garden. 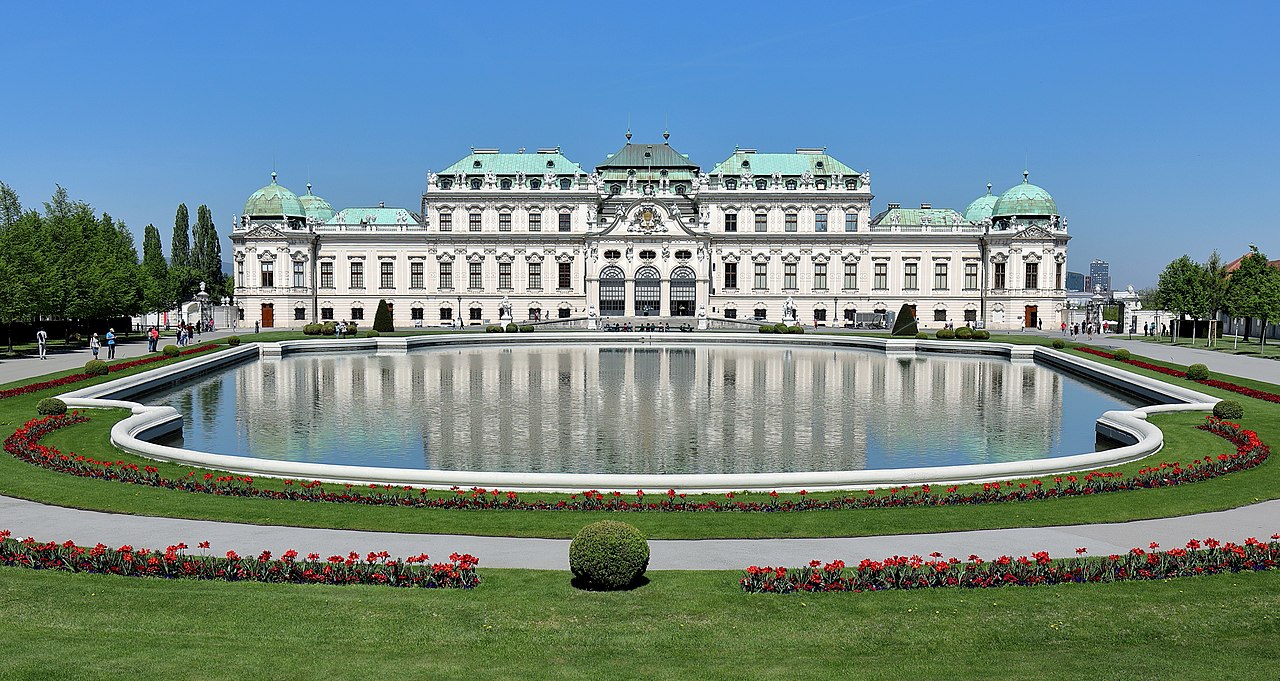 Upper Belvedere (Oberes Belvedere), the construction of which was completed in 1724 r., it is at least twice the size and greater than the Lower Belvedere. Its unusual roof line, resembling a series of green tents, brings to mind the Turkish camp from the time of the siege of Vienna. Some people believe, that the domed octagonal pavilions refer to the architecture of the mosque. The building was built specifically for entertainment purposes: the prince organized huge masked balls and parties there, and outside, guests watched fireworks displays. The invited people rode their carriages to the centrally located lower hall (earth room), richly decorated with white stucco. Four columns rising in it, supported by four bent Atlantean figures, decorated with war trophies.

W XIX w. Sala Terrena was covered with a glass roof. Today it serves as a ticket office and museum vestibule. On the right side there is a Garden Room (garden hall) decorated with trompe loeil frescoes. It is the first of a series of rooms on the ground floor used for temporary exhibitions. On the left side there is a bookshop and a section devoted to exhibitions of art created after 1918 r., where the exhibits change from time to time. There is a cafe a little further. There is not enough space in the museum to show all the collected works, therefore temporary thematic exhibitions are organized, on which a representative part of the collection is exhibited. Some of the exhibits come from the permanent exhibitions in the gallery upstairs, therefore it can happen, that the facts will not coincide to the letter with the description below regarding the first floor. There is also hope, that works from the beginning of the 19th century will finally be exhibited in the halls on the second floor.

Most visitors immediately take their steps to the Marble Hall, brighter and taller than its counterpart in the Lower Belvedere. It is right here at 1955 r. the Austrian state treaty was signed, under which – in return for the withdrawal of foreign troops – Austria declared neutrality. In the hall there is a painting commemorating that event. It depicts the heads of the Allied delegations: Molotov (USSR), Pinay (France), Macmillana (Great Britain) i Duliesa (USA). You can also see a photo, at which the chancellor, Leopold Figi, standing on the balcony, waves the signed Staatsvertrag, and the crowd in the street cheers.

In the room on the right side of the Marble Room there is a permanent collection of art from the turn of the 19th and 20th centuries. The Plain in Auvers by Vincent van Gogh was hanged there, a painting painted a month before the artist's suicide in 1890 r. Next to it, you can see a canvas by Richard Gerstel depicting the Kahlenberg funicular. The work of Egon Schiele is represented by the Interior 1907. In the same room you can also admire the bust of Mahler by Rodin, and a study of the monument to Victor Hugo. The great writer yields to the pressure of allegorical figures, figments of his imagination.