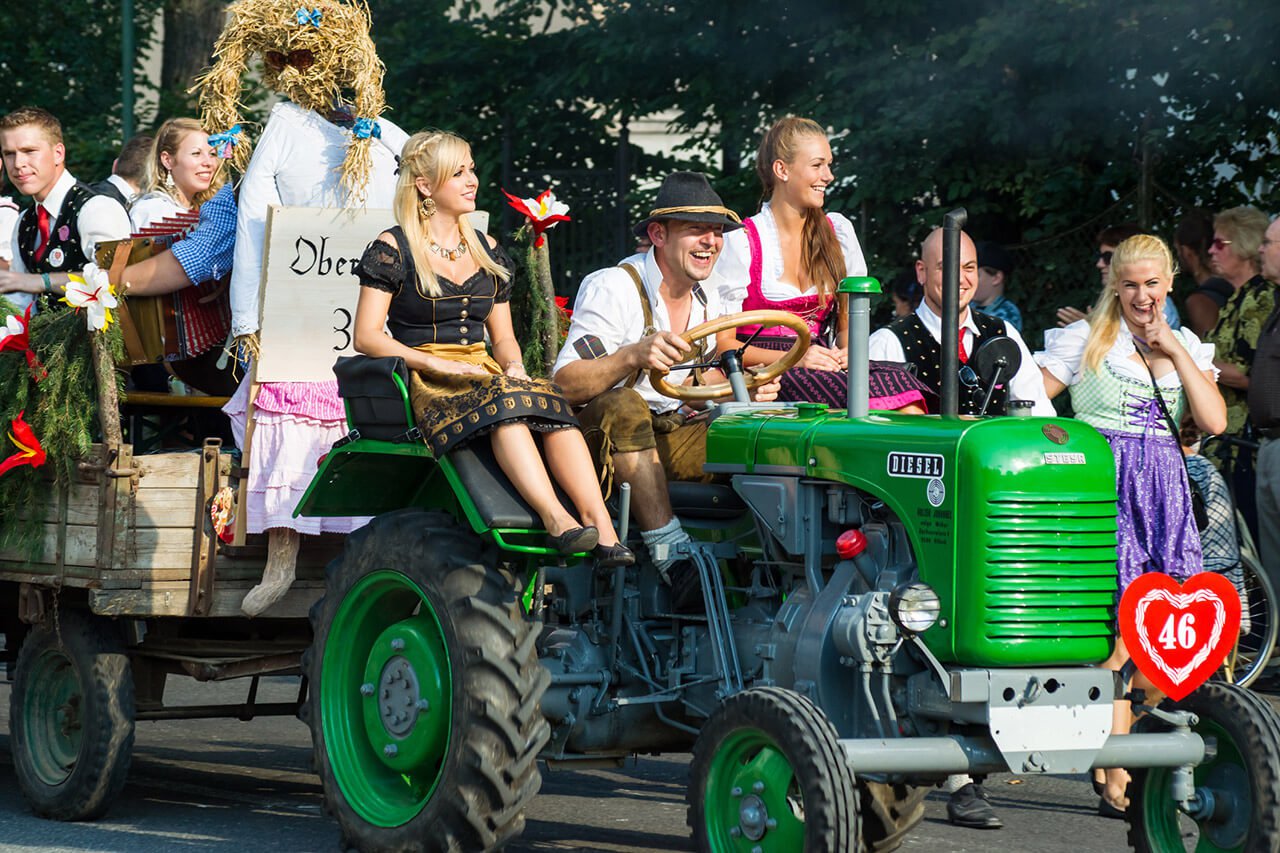 Traditional lifestyle – Alpine inhabitants are often examples of the Austrian stereotype. The women here wear Dirndl – pleated skirt with a tight bodice, with a traditional apron, bonnet and blouse with short puffed sleeves. Men, aware of its position, they dress in jackets without lapels, green hats, wide suspenders and shorts or breeches. Such costumes are worn on a daily basis in more remote places, and tourists can see them most often during ceremonies and processions.

In early summer, shepherds travel with their cattle to the mountains and live there in summer huts, watching over the herds. As the animals nibble the grass, they descend gradually. Both embark on the halls, as well as the return become a great occasion to celebrate. The cattle then have bells tied around their necks and decorated heads.

Folk customs are cultivated by the inhabitants of the Alps and are expressed in many celebrations and events, organized throughout the year. During their duration, traditional customs are often presented, such as greeting spring (with painted masks on their faces and to the accompaniment of bells), yodel, alpine horn game or alpine wrestling. The latter consists in placing the opponent on both shoulder blades at the same time.

People are usually greeted with the greeting Gruss Gott or Serwus, a żegna słowami Goodbye lub Goodbye. This also applies to sellers in stores, waiters etc.. No greeting would be taken as a personal affront. A handshake is acceptable when introducing yourself to the other person, similar to saying goodbye. This is also how young people behave in informal contacts.

During a shared meal, Austrians usually raise their glasses before the first sip of wine, saying the word Prost. You should remember this, to look at the eyes of your fellow diners during this time, otherwise one may be accused of insincerity. There is also a signal to start eating before the meal – Enjoy your meal – having the character of mutual wishes.

Some older Viennese still attach importance to the language and etiquette of the empire, today called Kaiserdeutsch or Schónbrunndeutsch. Some consider it pompous, others be charming, depending on your point of view. This behavior can be encountered during the performance, when a man names a woman Gnadige Frau (Madam), adding the formal Kuss die Hand (I kiss the hands). Sometimes he actually kisses a woman's hand or snaps his heels. Some people turn to others very often, using the polite form of Hen (pan) i Frau (pani).

Manifestations of conservative behavior can be found in many places, np. none of the Austrians cross the road on red traffic lights, even when there is not a single car in sight (theoretically, you can pay approx 8 € penalty for such an offense).

Going to dinner at one of the better restaurants, listed in this guide, you must wear a jacket and tie. Also going to the opera and theater, Austrians dress elegantly. Admittedly, jeans and sneakers in foreigners in such places are tolerated, but they are not welcome.

Nudists can occupy strictly defined sections of the beaches (marked with the abbreviation FKK), and topless sunbathing is quite common in many places. However, women should exercise extreme caution in this situation. It's best to stick to the rule: if nobody does, don't do and you. Gentlemen can wear shorts not only on the beach.

Religion plays an important role in the lives of many Austrians. Outside of cities, for example, you can often find roadside shrines with fresh flowers. Religious freedom is guaranteed by the constitution. Even children's rights to freedom of religion are protected: to years 10 the matter of children's religion remains in the hands of the parents, at the age of 10-12 years, the child must express himself / herself about the preferred religion, children aged 12-14 years it is forbidden to order a change of religion, and when they are finished 14 lat, they are now left with full independence in choosing their religion.

According to research by z 1991 r., 78% of Austria's population professes the Roman Catholic religion, 5% they are Protestants, a 9% atheists. Almost 5% Austrians belong to other religious groups, and the rest refused to give their confession. The largest number of Protestants live in Burgenland and Carinthia.